Looking for your next literary adventure?

Check out our playlists for collections of short videos and podcasts to expand your reading interests.

Check out our learning packages to explore ways of expressing yourself through literary arts with these articles and activities.

How Singlish Went From 'Cannot Make It' To National Hero(47 min)
Musician and host Shabir Tabare Alam explore the origins of Singlish and traces its history in Singapore.

The History Of Japanese Manga by Wonderbot Discovery (8 min)
Manga plays a large part in the Japanese publishing industry and isn’t showing any signs of slowing down. What is the history of manga in Japan? How did manga start? And how did it evolve to achieve the global influence it has today?

Welcome to the World of Manga! #MangaMonth by The British Museum (6 min)
Curator Nicole Rousmaniere speaks about manga, and shares highlights of her favourite pieces of the serial visual storytelling format.

One-Punch Man - Official Anime Behind The Scenes by vizmedia (6 min)
In this clip, we take a look at the process of turning the One-Punch Man manga into the anime.

Get insights on reading and written-word expressions with these articles and activities.

The Malay language has been the lingua franca of maritime Southeast Asia for centuries. Traders and travellers had to learn Malay in order to communicate with the local population. The history of the Malay language can be divided into three periods: Old Malay (6-15th century), Classical Malay (Jawi scripts) and Modern Malay.

Around the 15th to mid-19th century, the region was under Islamic rule and thus Malay language evolved around Arabic and Persian culture. The Jawi script is based on Arabic alphabets with five additional letters representing the Malay phonemes. By the 19th century, Malay had absorbed and loaned words from many other languages, due to colonisation and migration.

The earliest examples of Chinese language are divinatory inscriptions on oracle bones from the Shang dynasty. In the 1930s, a standard Chinese language, Mandarin, was adopted. The entire Chinese character corpus comprises well over 50,000 characters.

Oracle bones from the Shang dynasty

The Chinese orthography centres on Chinese characters, which are traditionally arranged in vertical columns, read from top to bottom down a column, and right to left across columns. With the growing importance and influence of Mandarin, it has been gaining popularity in schools throughout East Asia, Southeast Asia, and the Western world.

Tamils in Singapore have settled in the country through continuous waves of migration over a period of 200 years. As early migrants became settlers, language became useful tools that fostered social integration amongst the diverse groups of Tamils.

Tamil language education was provided as early as 1834 in Singapore, and Anglo-Tamil schools were established in 1873. It is evident that the roots of most present-day Tamil culture, customs, religious ideologies, and affiliations in Singapore can be traced to the 19th century and that they have continued to evolve over the centuries. You may download the complete package as a PDF here.

Naruto, One Piece, My Hero Academia, Jujutsu Kaisen – these are just some of the more popular anime series out there. While these series are available in anime or animated format, the basis for their stories were developed from their original manga. “Manga” refers to Japanese comics or graphic novels.

Manga is an art form that tells a story through the greater usage of pictures over words. However, it doesn’t mean that text is entirely overlooked. In fact, text in the form of narration, dialogue, or sound effects all serve to enhance the reader’s experience of the story.

Unlike the full-coloured pages of most comics we see today, manga is often presented in black and white. It is typically published in manga-based magazines by the different publishers on a weekly or monthly basis. Creators of manga are known as “mangaka” and they often both write and illustrate their own works.

If a series becomes popular, its chapters then later get combined into what is called a “tankōbon” that is, an edition or volume with several chapters in it.

This is part one of a three-part series on manga. For more resources on this topic, check out NLB’s collection of eBooks here!

In part one of our three-part series on the marvellous world of manga, we introduced you to its history and its writers. In part two, we’ll delve into how manga is read and what to read next.

How to read manga?

Unlike books in English that are traditionally read from left to right, manga panels and speech bubbles should be read from right to left. Although the sequence can be confusing when you first start reading manga, you will soon get used to it! 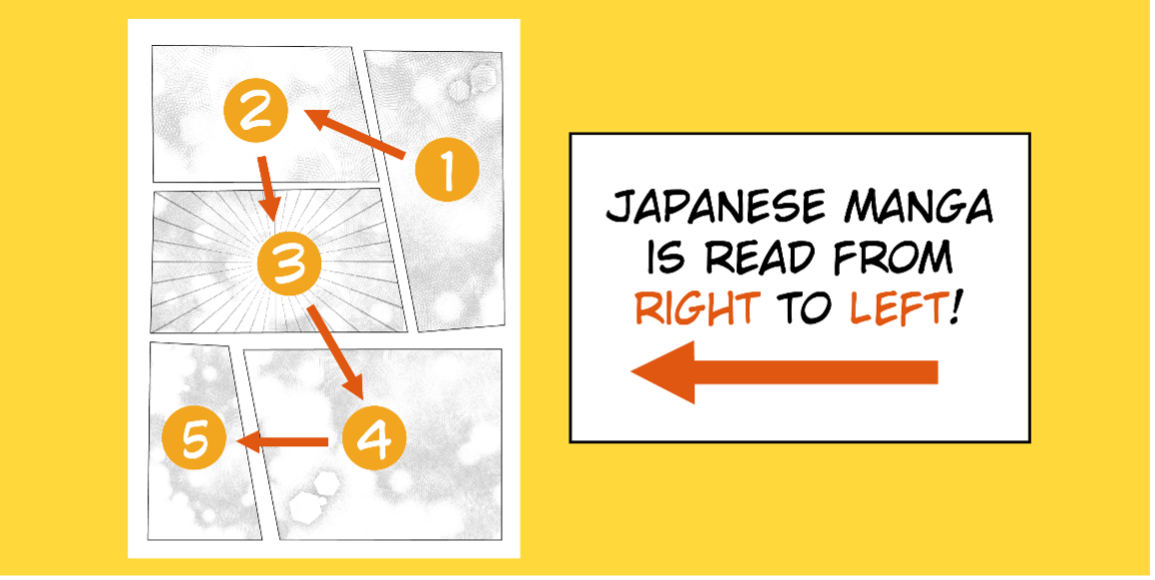 What genres are there?

The main genres in manga may not be the ones that you’re familiar with. The usual literary genres, like action, comedy, and science-fiction, are known in the manga world as sub-genres, but not the main genres.

Instead, manga is typically sorted by how it is marketed to different demographics or age groups.

Here are some popular genres to note:

Targeted at girls aged 12 to 18, manga of this genre usually centre around the topics of friendship, slice-of-life, and even romance. 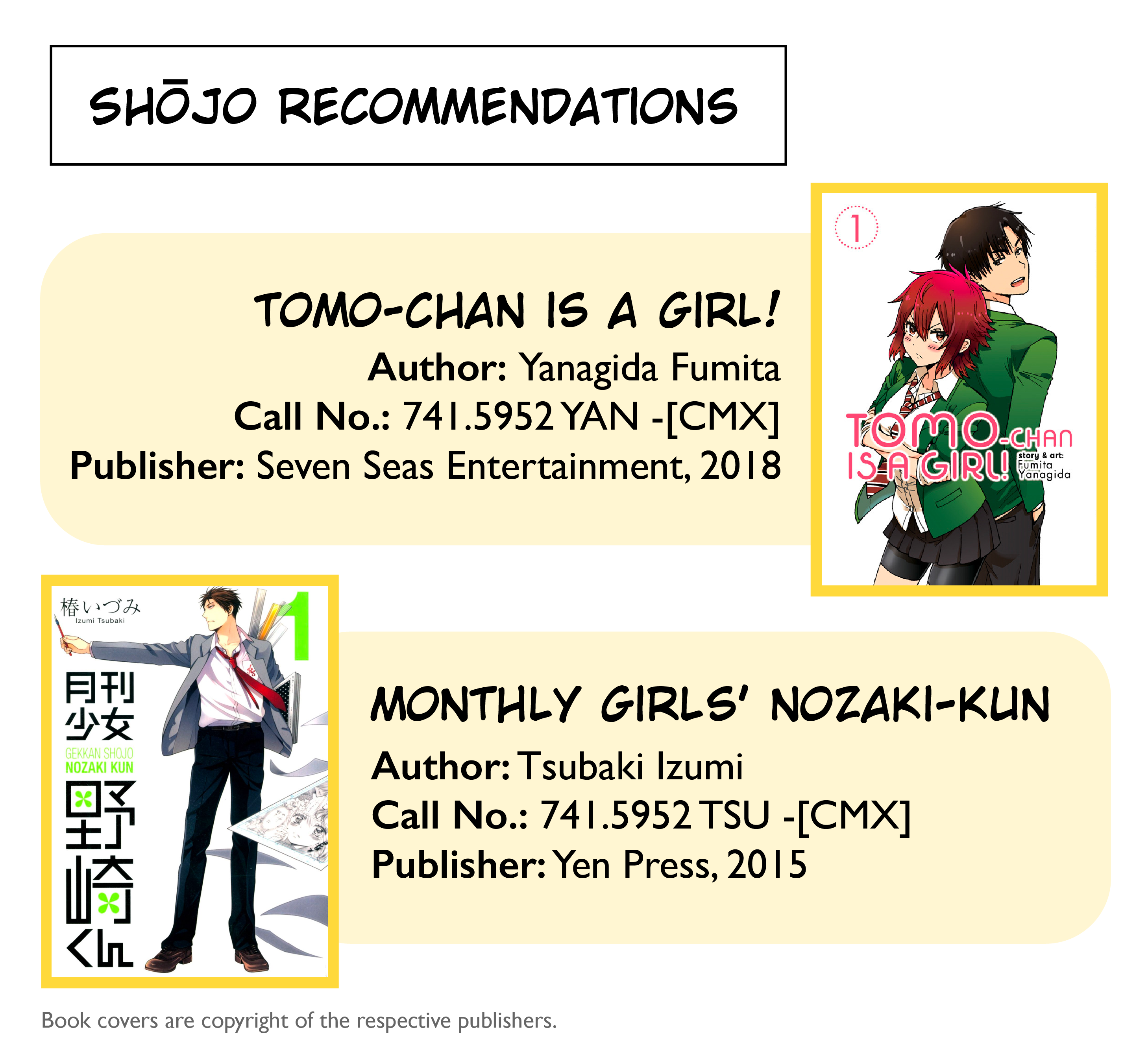 Targeted at boys aged 12 to 18, manga of this genre usually have themes of action and adventure. Shōnen is the best-selling genre, with many popular series gaining international fame. 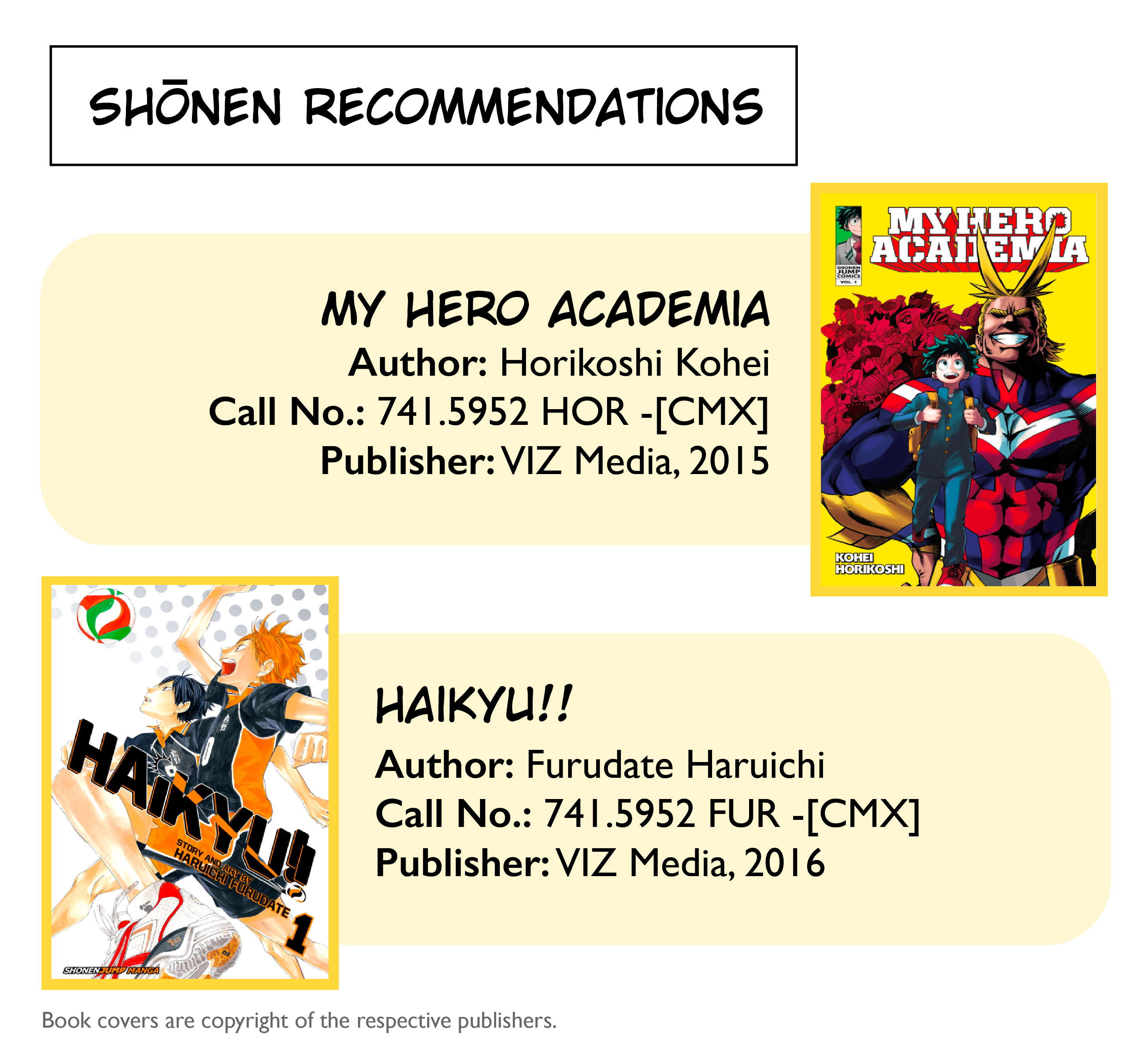 Targeted at children under 12, manga of this genre tend to be episodic, have child-friendly themes, and tell stories that teach readers about the world around them. 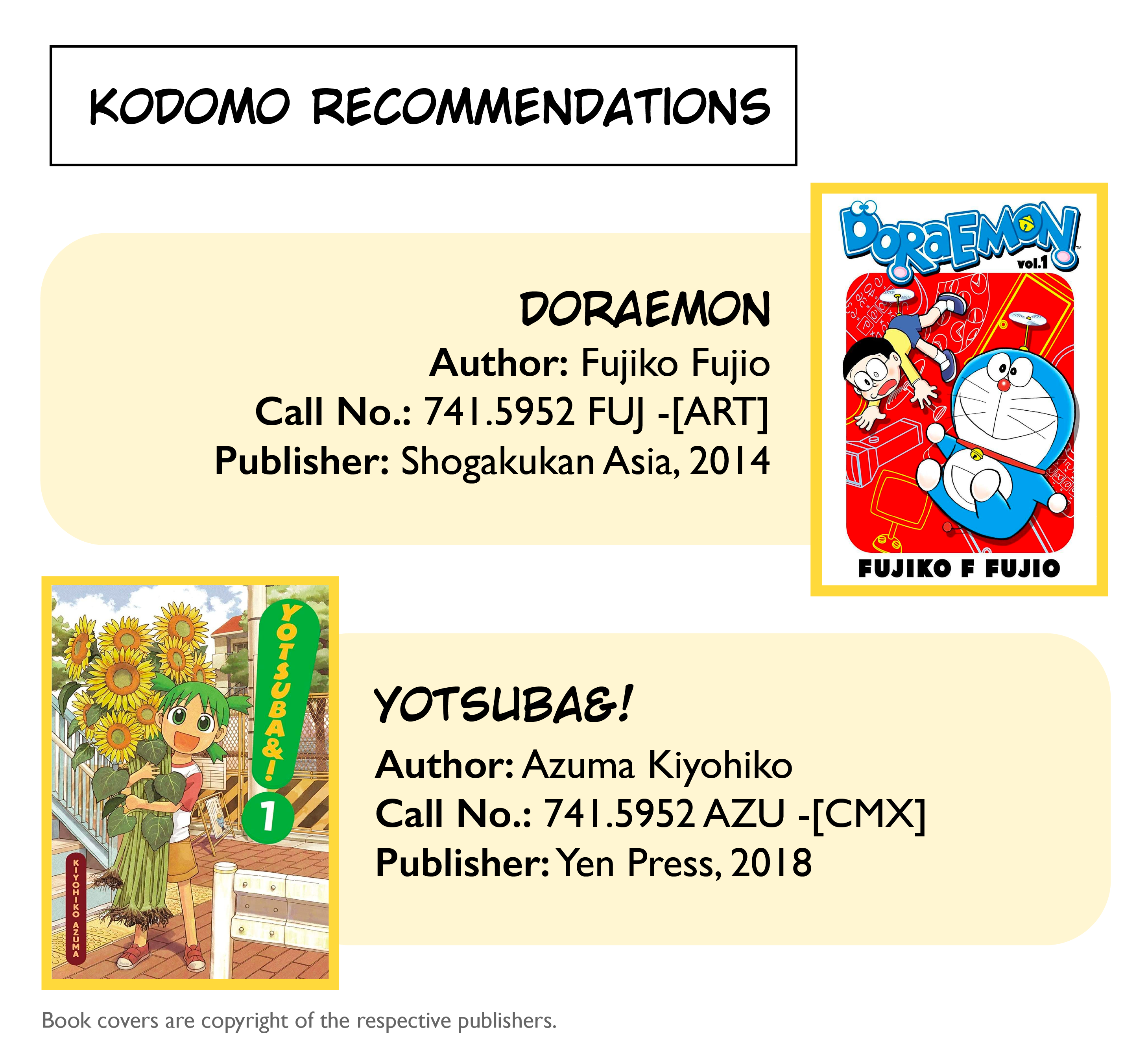 As of April 2022, the following public libraries each have a manga collection for you to peruse:

If you prefer eBooks, check out NLB’s eCollection of manga titles here! Browse the “Best of Comics & Graphic Novels” collection, or access titles by publishers such as VIZ Media and Seven Seas Entertainment.

In this final part of the series, we will discuss manga in its various forms.

Manga’s versatility lends itself to adaptations in a variety of multimedia formats. These different types of adaptations can appeal to different demographics. 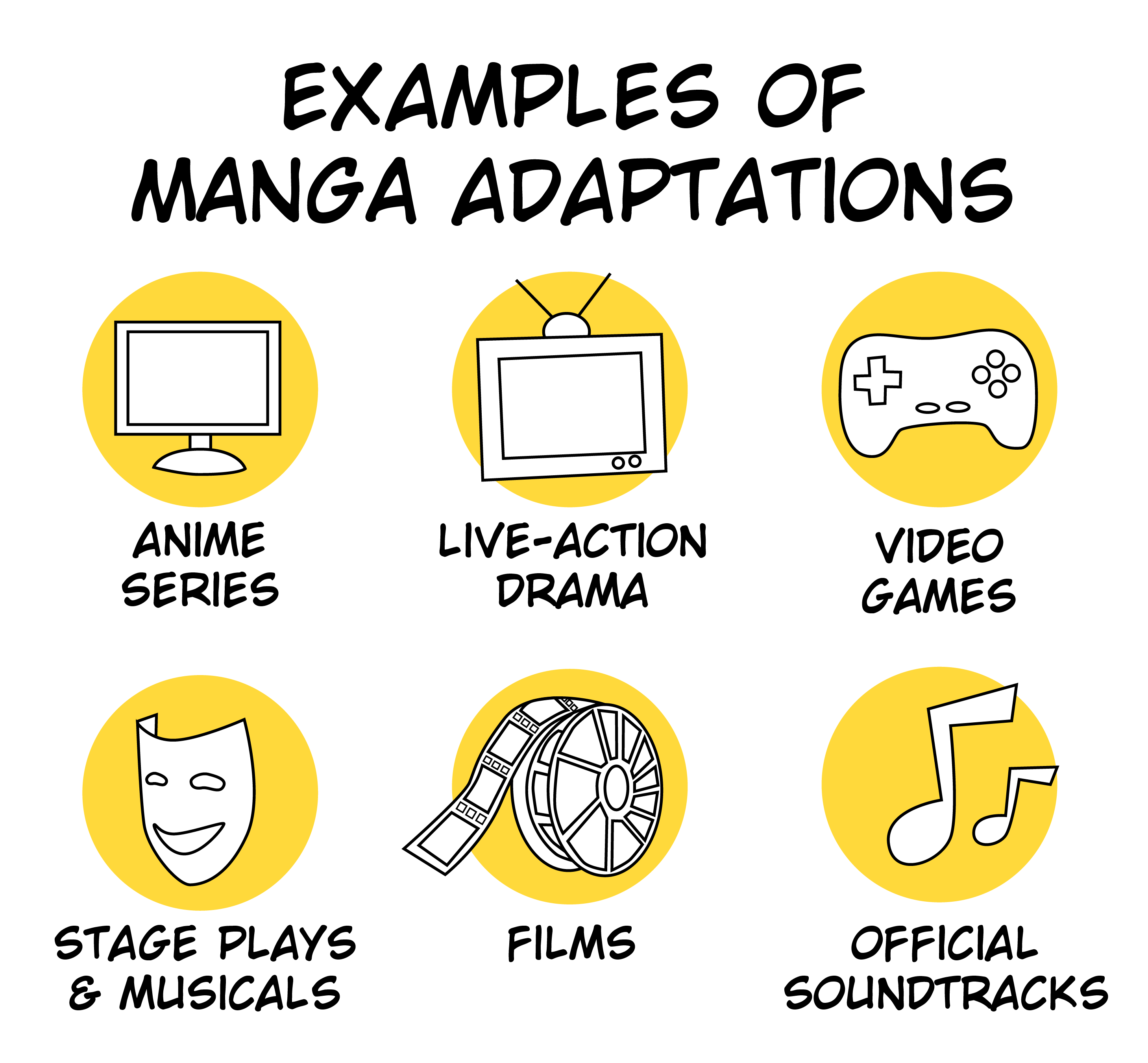 One such adaptation is anime, which is a style of animation that originates from Japan. It’s rare to discuss manga without also talking about anime, since the former is frequently adapted into the latter. As anime becomes more accessible on popular streaming platforms, it can reach massive audiences and draw new fans into the original manga.

Popular manga series are sometimes even adapted into live-action dramas and films, where characters are played by human actors instead of illustrated with 2D computer graphics.

The versatility of manga extends beyond film and television. Franchises can cover a range of products such as merchandise and games, which are developed and marketed to beloved fans. For example, popular series like Naruto and Bleach have seen developers releasing multiple spin-off video games on gaming consoles such as the Wii, Gameboy, and PlayStation.

In more recent years, manga has even become a basis for mobile games, furthering the original story and its experience in a portable format.

The adaptation of manga is not always one-directional. Did you know that the renowned Pokémon brand actually started out as a video game series? It has since been serialised as a manga given its commercial success.

Seeing how versatile and varied manga can be, there’s definitely something for everyone.

For more resources on this topic, check out NLB’s collection of eBooks here!

Here are some other titles you can check out to immerse yourself more deeply into the wide, wonderful world of manga! 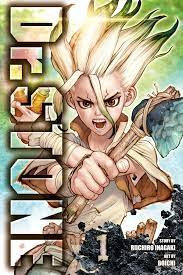 Dr. STONE
Author: Inagaki Riichiro
Publisher: VIZ Media, 2018
Call No.: English 741.5952 INA -[CMX]
Available as a physical copy only. (Find a copy at the public libraries via the NLB catalogue!)

One fateful day, all of humanity turned to stone. Many millennia later, Taiju frees himself from the petrification and finds himself surrounded by statues. The situation looks grim—until he runs into his science-loving friend Senku! Together they plan to restart civilisation with the power of science! 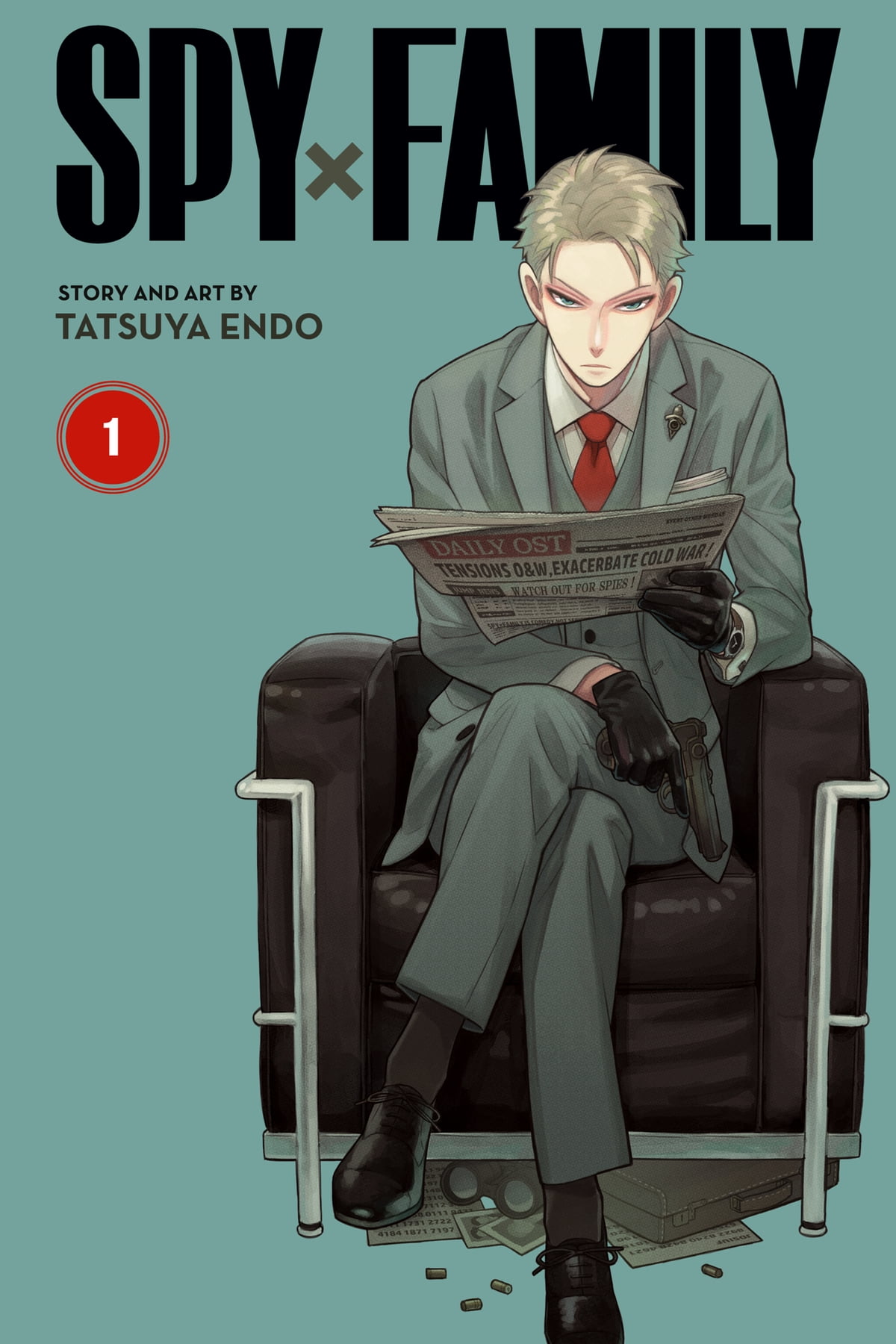 Master spy Twilight is the best at what he does when it comes to going undercover on dangerous missions in the name of a better world. But when he receives the ultimate impossible assignment—get married and have a kid—he may finally be in over his head! 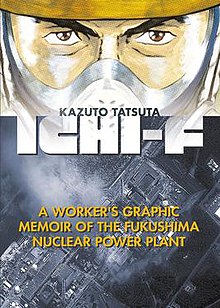 This is the story of a man who took a job. Kazuto Tatsuta was an amateur artist who signed onto the dangerous task of cleaning up the Fukushima Daiichi Nuclear Plant, which its workers came to call “Ichi-F.” This is the story of that challenging work, of the trials faced by the local citizens, and of the unique camaraderie that built up between the mostly blue-collar workers who had to face the devious and invisible threat of radiation on a daily basis. After six months, Tatsuta’s body had absorbed the maximum annual dose of radiation allowed by regulations, and he was forced to take a break from the work crew, giving him the time to create this unprecedented, unauthorised, award-winning view of daily life at Fukushima Daiichi.

The book covers and synopses are the copyright of the respective publishing companies.